Welcome to the Open2Flow blog

This Open Blog section is for longer blogs and is open to registered users.  To prevent misuse (spamming, hackers) registered users should initiallly use the Submit a Blog facility (in User Menu) - after review you are changed to 'author'

Many companies suffer from a lack of cohesion and connectedness. Managers and staff alike generally lack a holistic view of their organisation in terms of its internal flow of energy and value creation. Most people in organisations do not have a full view of what goes on across the organisation, and the executives at the top may have an overview of the various departments, but generally have little understanding of what the issues are at the shop floor level. 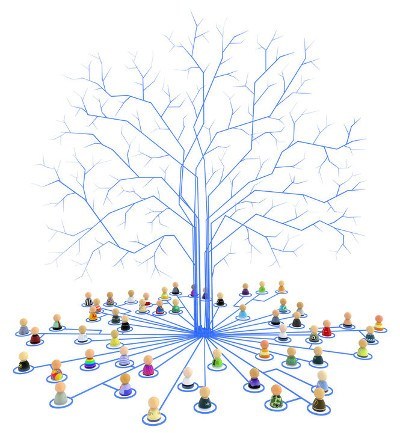 in the way departments and teams often work in very entrenched silo mentalities. Silos produce poor cross-departmental collaboration and pan-organisational coherence. The situation is particularly acute in Western companies where people typically specialise in one area of work and then stay in their field – if they do move on, they tend to go on to similar work elsewhere, changing company rather than changing type of work.

This contrasts to Asian firms, in particular Japanese, where people are routinely rotated to different departments, irrespective of their specialities, typically in 2-5 year cycles, so that as they become more senior, irrespective of position, they gain a good understanding of how the company works and in particular are sympathetic to the various perspectives as seen from different parts of the organisation – in short they also become generalists with a holistic view of the organisation and its place in society, they are the bridges and glue of the whole.

In the West we tend to put resources in tools like process improvements, particularly at a team level. Agile implementations and moves towards business agility are examples of current day efforts to improve team effectiveness, and thus the ability to add value for customers in a speedy, flexible and iterative way. Which is all great, but this happens at a team or section level, with ‘high performing’ teams often rewarded irrespective of whether their high performance is actually beneficial to the smooth operation of the whole organisation as a whole. This is like putting a high performing Rolls Royce engine in a Volkswagen Beetle chassis – this would prove untenable, the Beetle was never designed to cope with the power of the RR engine, the whole would crumble in the long run. Likewise interventions are usually isolated and do not tackle the challenge of getting the organisation to operate more effectively and coherently as one whole.            .

Moreover, an organisation is only as effective as its weakest link, so concentrating resources on some priority teams while largely ignoring others, or while not considering how this might effect the whole, can actually dampen the overall organisational effectiveness. Even with balanced high performing teams there is often no engagement model in place that guarantees that all teams are operating in tandem towards the same purpose. One often finds teams competing with each other internally, or unknowingly duplicating efforts.

There may be several reasons:

Clearly we need pan-organisational models of engagement. These do exist. They can be found in practices such as Presencing Theatre, World Cafe, Appreciative Enquiry, Circle Ways, The Art of Hosting and many other participatory approaches also collated in Liberating Structures. The most open-ended and engaging approach of them all, however, which really allows genuine pan-organisational conversations that matter to emerge, is Open Space Technology (commonly Open Space), the structure used in ‘Unconference’, ‘Hackathon‘ and ‘BarCamp’ events. While there are many ways to run concurrent conversations, Open Space Technology does this particularly well at scale, and is ideal in larger organisations needing cross-departmental exchange at all levels simultaneously.

Open Space Technology, commonly Open Space, is a method for hosting highly participatory, large group, whole-system collaboration based on self-organisation in which participants themselves co-create the agenda, experience and outcomes that matter to them. Click here to see our article What is Open Space Technology?

Open Space Technology has many benefits (see Beyond unConferences) but in the context of pan-organisational collaboration, innovation and coherence Open Space Technology enables cross-fertilisation of ideas and cross-collaboration across departments in a highly interactive environment at once on a massive scale. An Open Space event can lead collectively to a holistic re-energising of the whole organisation, creating conditions for the organisation to thrive organically. Moreover it can be a massive and long-lasting boost to staff engagement and morale, largely because deep conversations that matter to them can take place. These vital conversations are rarely had in organisations, and yet are hugely necessary for people within the organisation to flourish.

The benefits of using pan-organisational Open Space Tech for organisations are:

Ultimately Open Space Tech enables thousands of meaningful conversations to happen serendipitously at scale and across the organisation that otherwise would never have happened and would have been impossible to plan, all within a limited time scale (1-2 days)

So given Open Space Technology has so many advantages, why is it not used more frequently in organisations? What are the stumbling blocks? Some have already been mentioned earlier, but here are few as more:

This lack of a clear agenda (the agenda is created by the participants on the spot at the start of an Open Space Event) is probably the biggest stumbling block within commercial organisations, as managers and sponsors are often expected to state clearly what the anticipated outcomes of such a meeting should be (in order to justify the funding for it, for instance). Yet that is precisely the catch 22. Open Space Technology relies on emergence, serendipity and new creative solutions to whatever challenges brought the people together to the Open Space event in the first place. Agendas pre-define solutions, they pre-determine outcomes and as such they stifle emergence. The whole point of Open Space Technology without pre-set agendas is to enable issues to emerge which would otherwise never have arisen.

Agendas kill emergence and thereby also stifle innovation and motivation. People feel caged in by (other people’s) agendas. Yet for managers coming from a mechanical view of business, “agendalessness” is most difficult to fathom. Managers will almost always want to interfere and include some agenda. It is ironic that in our times when leaders are crying for more staff engagement, collaboration, participation, accountability and innovation, they are also imposing more agendas, the very thing that kills all those virtues. Agendas create precisely those conditions which disengage people. The only agenda that works is one created by ALL those participating there and then, in the here and now, in a free market-place where people can opt in and out of the authentic conversations.

For this reason, it is important that some people in the organisation know how to run Open Space Technology events. In particular they need to fully understand the issues around invitations, agendas, co-creation and emergence. It needs people who can resist what many managers want, such as adding items to an agenda in advance. Because Open Space Tech meetings operate on the basis of opt-in invitation, people will only feel inspired to join a meeting, if it is about an issue that concerns them, is burning for them, and is not laden with pre-conceived solutions which do not address their perspective. Open Space Tech facilitators need to have a thorough understanding of the role of invitation (versus imposition) and the effect of agendas on the matter.

There is a general need for organisations to have more facilitators and facilitative leaders, if organisations are to thrive (through innovation and collaboration). But they should also have an Open Space Tech facilitator or two at hand. While more general facilitators or organisational development practitioners are in a good position to introduce people-centric participatory next stage ways of organising and working to the organisation, there should ideally be someone who is specifically able to bring about a pan-organisational, cross-functional and holistic understanding of, and engagement in, the organisation through Open Space Technology. What is needed are facilitators who can bring about internal flexibility and agility by calling Open Space events at short notice, while also understanding the importance of creating a safe and transparent environment for emergence to happen, opening and holding the space.